Playing for Peace in Action

At the Summer Chamber Music Workshop, a pianist from Ramallah, West Bank named Lara Harb was part of a Schumann Piano Quintet group at Apple Hill. Her fellow group members were Assaf, an Israeli violinist and soldier; Amr, a Syrian violinist; Lotem, an Israeli violist; and Mahmoud, an Egyptian cellist. Lara wrote this essay about her experience. 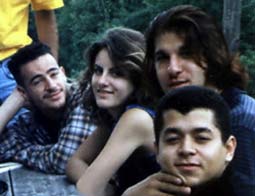 Pianist Lara Harb, center, with other Playing for Peace Scholarship recipients from across the Middle East

I nervously set up my music on the piano and looked at the Egyptian cellist, but he was busy setting up his music. I glanced at the Syrian violinist who was the closest to me and smiled as I saw the usual calm expression on his face. I then looked over, with hesitation, at the Israeli violist. As our eyes met, my smile faded away for I saw an expression on her face that was new to me. I wondered if she was feeling the same way I was. Did I have that same expression on my face? We were suddenly interrupted by the gesture of the first violinist, who was also from Israel, indicating that we were about to start playing. I had immediately turned my face towards him and was sunk in fear and anticipation again. He noticed that and smiled at me comfortingly.

That smile; I had seen that same smile before. I could see clearly the image of a person, a young man, smiling at me that same way. An avalanche of relating images suddenly flooded into my mind. I heard people screaming. There were a few gun shots. I remembered faces of strangers being dragged into an Israeli military jeep. There was a loud explosive sound and the crowds, all of a sudden, were dispersing in all directions. A strange smell was stinging my nose. My eyes were burning and my lungs were bursting – it was tear gas. I was running aimlessly; I just wanted to escape that acrid stench. I suddenly bumped into someone. My heart sunk deep into my stomach as I looked up and saw that the man was an Israeli soldier. He smiled, trying to reassure me that he wasn’t going to harm me. I couldn’t trust him. I was only 10, but I knew that those soldiers were hurting Palestinians. Seven years later, that smile came to haunt me again. We started playing the Schumann Piano Quintet.

Suddenly all the frightening memories vanished as if they had never been real, as if they were just a dream. I felt like the small worlds of each one of us were uniting into one limitless universe. We were all in absolute understanding of each other. There were no boundaries and no differences. Arab, Israeli, Jew, Christian, Moslem: none of that existed in the universe we were creating – we were all simply humans. Fear and insecurity were unknown to us. Life, for the first time, seemed to make sense to me. I was free! I woke up from a terrible dream into a beautiful world. I was experiencing something I felt was unfathomable before; I was experiencing peace – true peace. I felt so lucky because such true peace will probably not exist in the Middle East, at least for a long time. It was as if I had been given a glimpse of something others would only experience in the future. I was stunned by the beauty of the music we were playing.

When the piece ended, I wondered if Schumann ever even faintly imagined that he would change the life of a girl from the Middle East at the end of the twentieth century. His music opened up my mind, gave me hope, and gave me the opportunity to experience something heavenly. I thanked him. I then looked at the Israeli violinist. He smiled and I smiled back.

Click here to read the description and history of Playing for Peace.


“Apple Hill has played and continues to play such an important part in my life, as a professional musician, as a teacher, as a human being.”
-Beste Tiknaz Modiri, Apple Hill summer participant, professor at Istanbul University Conservatory, and violist with the Borusan Istanbul Philharmonic Orchestra

“I definitely know that my life as a musician and as a teacher would have been very different if I had not been involved with Apple Hill.”
-Reem Abu Rahmeh, Apple Hill participant and student at Keene State, teacher and music department head at King's Academy in Amman, Jordan

“I’ve made life-long friendships with people from all over the world…how is that possible in two weeks?”
-Sinem Sadrazam, Apple Hill participant and viola faculty at Eastern Mediterranean University in Cyprus

“Everything about Apple Hill that influenced my life now influences this school where I am."
-Lena Nemirovsky-Wiskind, Apple Hill participant and piano faculty, director of the Jerusalem Conservatory Hassadna