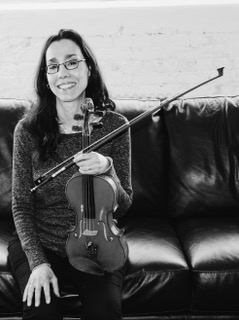 Cenovia Cummins, violin, is an active freelancer in NYC and has served as concertmaster for many orchestras including Riverside Symphony, Eos, Roanoke Symphony, Naumberg Orchestra, NY Pops, San Francisco Ballet and School of American Ballet. She is also an active chamber musician having played with the Chamber Music Society of Lincoln Center, Apple Hill Center for Chamber Music, Grand Canyon and Moab music festivals. She has appeared on the David Letterman show, Saturday Night Live, VH1, Good Morning America, backing up artists such as Tony Bennet, Britney Spears, Paul McCartney, Diana Krall, P. Diddy, and Rod Stewart among others. As associate concertmaster she has twice toured with Barbra Streisand. Cenovia’s violin solos have been featured in the major motion pictures Lovely and Amazing and more recently in the film Julie and Julia. She also has two feature violin solos on Nellie Mckay’s 2009 CD release “Normal as Blueberry Pie” a tribute to Doris Day. She was featured in the NY City Ballet “Red Angels” for four dancers and solo electric violin.