In August 2018, naturalist, violist, and long-time Summer Chamber Music Workshop participant Maya Rappaport spent a session at Apple Hill cataloging and sketching the wildlife that abundantly populates our 100-acre rural campus. Here, we present her journals and sketches from that time. 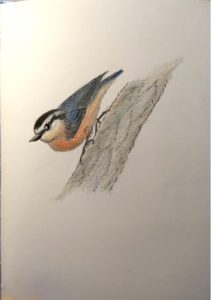 It has been a lovely, damp few days. Rain abounds, as do beautiful sunsets. I’ve been noticing monarch butterflies in larger numbers than recent years—they are floating across the landscapes on their yearly march to the wintering grounds.

Last night I saw a raccoon scurry into the bush from Apple Hill Road. Reports from others include opossum, owls, and voles (I’ve seen them too!), porcupine (and two babies!), and skunk.

Four turkey vultures circling above, riding the zephyrs. Above them, a broad-winged hawk. The high wheeze of cedar waxwings in the ash tree behind the barn. Robins on the lawn, hunting the tussock moth caterpillars which are so prevalent this year. A merlin flying high overhead—I found it because of the raucous alarm chatter of small birds. 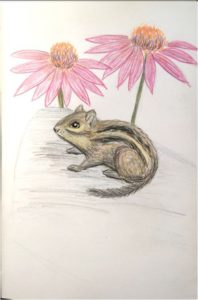 Damp! The rain has been persistent, coming down in droves at times. So the wildlife quietly keeps to itself, but for a few noisy creatures. Anoush tells me there is a nest of baby robins in the overhang Richard built last year. I’ve been watching robins hunting the tussock moths that are everywhere this year. They pick the insects up in their bills and fly off with them behind the rehearsal barn, where I guess they are nesting. It is so lovely to watch life play out. And even lovelier to witness it amidst the floating harmonies of strings and keys.

People say early this summer there were many snakes. But since the skies opened up a few weeks ago, soaking the lawns, I expect the garters are down in the depressions of the lower meadow, feasting on the emergent abundance of small wet hopping creatures. 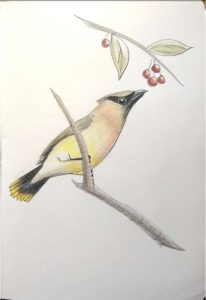 Rain means few wildlife observations—we’ve all been inside. Usually this time of year I am taken aback by the beauty of nighthawks in flight at dusk. But too much rain this summer to be out at dusk. We also missed the Perseids, which is something of a yearly tradition. The clouds cover up the meteors I know are streaming across our skies. The upside is the joy of knowing that the watersheds are replenished after too many months of drought.

The rain started in a beautiful crescendo. Small droplets upon droplets until the thunder was just overhead. In the fleeting moment of sunshine, a sweet odor of wood and earth and plants swelled up from the sodden ground. Careful observation of the forest floor reveals mushrooms in every stage from small round buttons to old soggy balls of white furry mold. And in the persistent rain, opportunistic robins prowl the ground, hunting the squirming things that are forced out by the wet. The yellow flowers glow all the brighter for the grey skies and extravagant green. I wonder where the butterflies go to escape the wetness. Surely they cannot fly with their delicately powdered wings all sodden with rain. 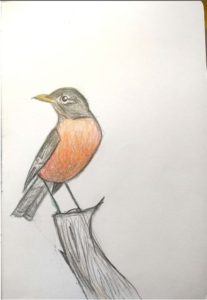 Dawn rose silvery in the mist around 5:30. The subtle lightening of greys and textured whites indicated the end of night and beginning of day. Boughs of trees close to me took on a beautiful three-dimensionality, and any further details were obscured by grey mists. Color reappeared—the yellows of black-eyed susans, the red of the barn roof, the ever-present green. The green, the green. My eyes knew it was lighter, but morning did not make itself apparent until the faint, fluid fluting of thrushes began from the far stands of trees, ages away in the silver-white damp. It is a lovely song of running water and sorrow and wildness. The robins began not long after the thrushes. A woodcock erupted from the ground, winnowing its wingbeats as it circled above the labyrinth and rehearsal barn. Then the morning chorus, faint in the damp, was joined by the chitter of goldfinches, the sweet high-pitched whine of waxwings, a twittering red-eyed vireo, flight notes of warblers, and the manic sweet and fall of a song sparrow. A catbird woke up, its “mew” sounding sleepy, husky, shaking off the night.

Flitting frantic bats circled above, hunting their breakfast, before going home to roost for the day (night). 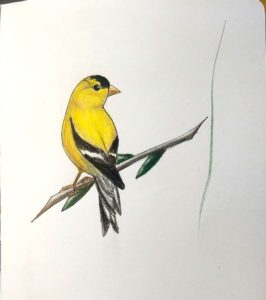 Most of my free time was spent in the hammock under trees. The moon, waxing to full, set around midnight. It glowed vibrantly orange as it sank below the forest that conceals Mount Monadnock.

Up in the gazebo enjoying the quiet after yet another rain. The birdsong is thin this late in the season, but signs of life are everywhere. Baby chipping sparrows, traversing in pairs, are not quite big or vocal enough, but still nearing adulthood. Now is the time of the catbird, the blue jay, the cardinal, the fluttering monarch.

Tales from past sessions include: black bear, moose, and coyote

On quiet nights, loons can be heard from the AH campus, but since loons are obligate to water bodies, and no water bodies are on our 100 acres, we do not include them as AH residents.

In 2011, baritone Don Wilkinson joined the session III Apple Hill faculty to teach and perform music–and, as it turned out, to share his love for birding. Over the ten days, Don and the rest of the Apple Hill community kept track of all the bird and other wildlife species spotted on our campus. The resulting list has been displayed here since then. The second page features a list of butterflies and moths–compiled by none other than Maya Rappaport.

Don passed away in the autumn of 2018. We remember him fondly through the birds he loved. 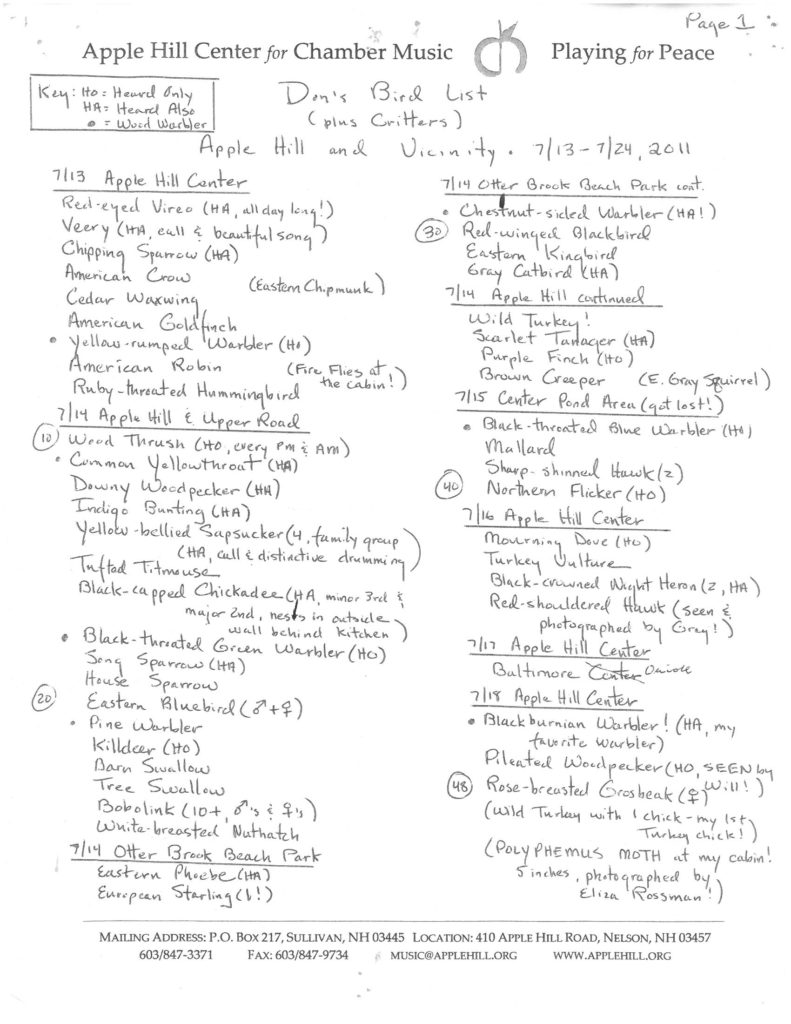 Page 1 of Don’s list of bird and other animal species at Apple Hill. From 2011. 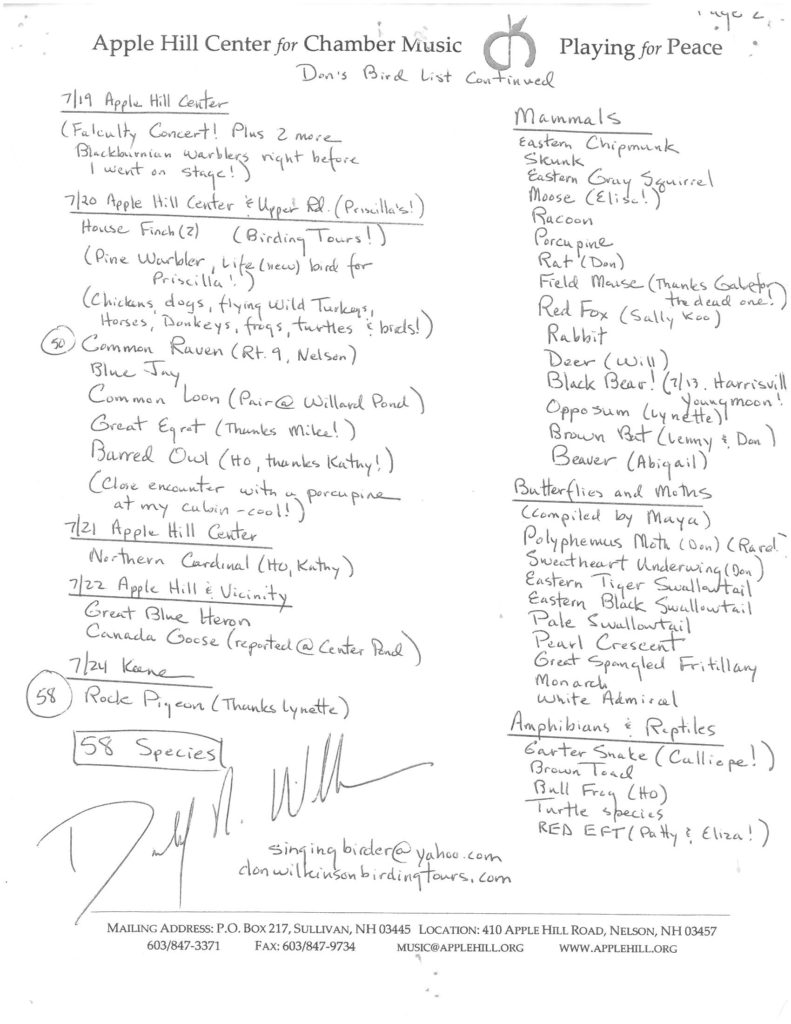