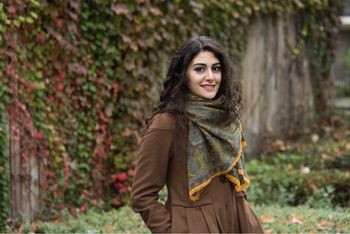 Lebanese violinist and composer Layale Chaker is the 2017 Ruth Anderson Competition Prize winner, the recipient of the 2018 Royal Academy of Music’s Guinness Award, and a finalist for the Rolex Mentor and Protégé 2018 Prize. Layale has appeared as soloist, performer, improviser, and composer in concerts, recitals, and projects around Europe, the Middle East, North and South America, and Asia, performing in the Alderburgh Festival, Junger Kunstler Festival Bayreuth, the Lucerne Festival for Contemporary Music, Impuls’ Festival, Beethoven Festival Bonn, and Avignon Festival among others. She performed her first violin concerto with the Bayreuther Philharmoniker, her string trio with members of the New World Symphony in Miami, as well as a tour across Germany, France, the UK, and the USA with her own ensemble, Sarafand. She has received commissions from the Newlands with Holland Baroque and the Diaphonique Franco-British Commission Fund in partnership with the London-based Notes Inegales Ensemble and musicians of the Orchestra of the Age of Enlightenment. As a member of Daniel Barenboim’s West-Eastern Divan, she performs around the year in concert halls such as the Royal Albert Hall, Teatro Colon, Mozarteum Salzburg, Philharmonie de Paris, Salzburg Festspiele and der Philharmonie Berlin among others. She has studied at the National Higher Conservatory of Beirut in her native Lebanon, the Conservatoire de Paris, the Royal Academy of Music in London, and is currently working towards her doctoral degree at Ecole des Hautes Etudes in Paris. She has studied under professors Mohamed Hashem, Carmen Scripcariu, Jeanne-Marie Conquer and Nicholas Miller.