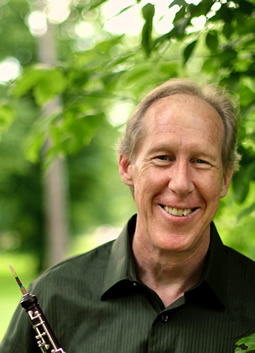 Mark Hill, oboe, is principal oboe of the National Philharmonic in the metropolitan Washington, DC, area. He has performed with the New York Philharmonic; the Los Angeles and Orpheus chamber orchestras; the orchestras of St. Martin-in-the-Fields, St. Luke’s, and the Mostly Mozart Festival; and the Baltimore, San Diego, New Jersey, and National symphonies. As a chamber musician, he has appeared with the Bach Aria Group, the New York Woodwind Quintet, the Guarneri and Mendelssohn string quartets, the Smithsonian Chamber Players, Chamber Music Northwest, Vermont’s Yellow Barn Chamber Music Festival, and the Kneisel Hall Festival in Maine. A member of New York’s Sylvan Winds for 20 years, he is currently a member of the Left Bank Concert Society in Washington. He has recorded for the RCA, Teldec, Delos, Koch International, Nonesuch, and Angel/EMI labels. His solo album of contemporary American works for oboe and English horn, Alchemy, was released by Albany Records to critical acclaim. A graduate of North Carolina School of the Arts, he holds a master’s degree in oboe performance from SUNY Stony Brook. Mr. Hill is an associate professor of oboe at the University of Maryland.